South Williamsport Fire Department
HomeAbout UsApparatusCPSC RecallsCall HistoryCall VolumeContact UsERGEvents CalendarFilesFire GlossaryFire NewsGuestbookLinksLive-In ProgramMembersNewsPicturesRecruitmentShift CalendarSunday BingoThe FallenVideo
Fire glossary
Click a letter to view all entries that begin with that letter.
A B C D E F G H I J K L M N O P Q R S T U V W X Y Z
1 of 22 of 2
32 entries in the Fire glossary beginning with "P"
Palmer drought severity index (PDI)
Technique for measuring impact of soil moisture changes on vegetation, for predicting fire danger and fire behavior.
Panic doors, panic hardware
Fire safety appliance permitting locked doors (typically self-closing) to be opened from the inside when pressed with sufficient force, thus permitting a person to open the door without having to turn a knob or lever.
Parallel attack
Fire containment method where crews constructs fireline at some distance from the edge of the fire (e.g., 100 yards) and then burn out the fuel in the buffer as the fireline is completed.
PASS device, personal alert safety system
An alarm device which signals that a firefighter is in trouble. It can be activated manually by the firefighter, or activates automatically if the firefighter stops moving. May be integral to SCBA or separately activated.
Passport (accountability)
System in which each firefighter has an identification document that is collected by the person in charge of accounting for the current location of the respective individuals, and returned to the firefighter when he or she leaves the dangerous area.
Perennial grasses
An extremely volatile fuel, after curing, in May, June, July, which can lead to large, fast fires that may reach larger fuels.
Personal alert safety system
See PASS device in Glossary of firefighting equipment.
Personnel accountability report
End-result of personnel accountability system. Best report is all hands, AOK worst is squad missing.
Personnel accountability system
Tag, 'passport', or other system for identification and tracking of personnel at an incident, especially those entering and leaving an IDLH area; intended to permit rapid determination of who may be at risk or lost during sudden changes at the scene.
Pickheaded axe
Standard fire axe having a 6 or 8 pound (2.7 to 3.6 kg) steel head with a cutting blade on one edge and a square, pointed pick on the opposite side. Come in various handle lengths.
Pike pole
See Hook.
Platoon
A subdivision of a fire company, led a fire officer of either the rank captain or lieutenant, such that one of several platoons is assigned to duty for a specified period. Also called a watch".
Plec-Tron
Jargon, brand-name of early radio-frequency paging system for summoning firefighters.
Point of origin
An element of fire behavior, indicating where a fire began, supporting further analysis of where the fire went or will go; evidence of specific origin is often obscured or destroyed by suppression tactics.
Pompier ladder:
A style of ladder that is also known as a Scaling Ladder". It is used to climb from one window to another. It differs from other ladders in that it does not rest on the ground it instead uses a large hook at the top to attach to a window sill. The word "Pompier" is French for fireman.
Portable water tank
Collapsible reservoir used for storing water transported to fireground by tanker. May be inflatable or supported by a frame.
Positive pressure
Pressure at higher than atmospheric; used in SCBA facepieces and in smoke-proof stairwells to reduce entry of smoke or fumes through small openings.
Positive Pressure Ventilation (PPV)
Ventilation of an area by the use of a fan to push clean air into that space and controlled use of openings for the escape of smoke and gasses.
Post indicator valve (PIV)
A type of valve used for underground sprinkler shutoff, having a lockable actuator atop a post with a window indicating open" or "shut" status of the valve.
Pre-fire, pre-incident planning
Information collected by fire prevention officers to assist in identifying hazards and the equipment, supplies, personnel, skills, and procedures needed to deal with a potential incident.
Pre-planning
Fire protection strategy involving visits to potentially hazardous occupancies for inspection, followup analysis and recommendations for actions to be taken in case of specific incidents.
Preconnect
Firehose on a fire engine which has one end connected to a pump outlet, and usually a nozzle attached to the other end. May also be a preconnected inlet hose (e.g., soft suction). Reduces steps at scene of fire.
Prescribed burn
Deliberately ignited fire for the purpose of forest or prairie management, often to remove heavy fuel buildup or simulate natural cycles of fire in an ecosystem. Also called controlled burn even if it becomes uncontrollable.
Probie
(also rookie) new firefighter on employment probation (a period of time during which his or her skills are improved, honed, tested, and evaluated).
Progressive hose lay
A method of deploying hoses along firelines during suppression and as they are built and reinforced, typically using 1 1/2-inch supply lines, gated wyes and 1-inch lateral lines with nozzles (or at least spigot valves) every 100 feet or so. As the line progesses, more hoses and valves are added.
Project fire
Any large fire requiring extensive management and the establishment of a temporary infrastructure to support firefighting efforts, such as fire camps.
Public alarm
Means for public to report a fire, includes telephone, street-corner pull-boxes, building pull-stations, and manual bells or sirens in rural areas.
Pulaski
Combination axe and grub hoe tool with a straight handle, used for building handline. Also known as P-tool".
Pump operator, technician
(also a chauffeur) person responsible for operating the pumps on a pumper and typically for driving the pumper to an incident.
Pumper
Vehicle apparatus for pumping water and other fire suppressants. See fire engine.
1 of 22 of 2
32 entries in the Fire glossary beginning with "P"
JOIN US!

The South Williamsport Fire Department is always trying to recruit new members for the company.

Interested in making a difference in your community? Why not join a volunteer fire company? Membership can be broken down into two different categories:

Active members are those members who actively respond on emergency incidents. A common misconception is that if you belong to a fire department you have to go inside of burning buildings. Actual firefighting is only a small part of the varying services offered by your local fire department. The South Williamsport Fire Department is currently seeking individuals who are interested in the following activities:

If you want to be part of an organization that values it's membership and contribute to your community please contact us today at recruitment@southfire.org or (570) 326-4167!  Also, check the files page to download an application today! 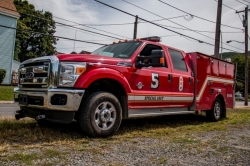 This site has been viewed 99,331 times.
Calls
News
Events
Pictures
Apparatus
Maintained by the members and staff of South Williamsport Fire Department. Designated trademarks and brands are the property of their respective owners. Copyright © 2006-2022. YourFirstDue Inc. All Rights Reserved. Content on this web site is supplied by South Williamsport Fire Department. YourFirstDue Inc. cannot be held responsible or liable for any content, text, pictures, or any other media found on this web site.
Management login
Powered by