The South Williamsport Fire Department is always trying to recruit new members for the company.

Interested in making a difference in your community? Why not join a volunteer fire company? Membership can be broken down into two different categories:

Active members are those members who actively respond on emergency incidents. A common misconception is that if you belong to a fire department you have to go inside of burning buildings. Actual firefighting is only a small part of the varying services offered by your local fire department. The South Williamsport Fire Department is currently seeking individuals who are interested in the following activities:

If you want to be part of an organization that values it's membership and contribute to your community please contact us today at recruitment@southfire.org or (570) 326-4167!  Also, check the files page to download an application today! 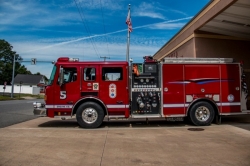 This site has been viewed 99,292 times.
Calls
News
Events
Pictures
Apparatus
Maintained by the members and staff of South Williamsport Fire Department. Designated trademarks and brands are the property of their respective owners. Copyright © 2006-2022. YourFirstDue Inc. All Rights Reserved. Content on this web site is supplied by South Williamsport Fire Department. YourFirstDue Inc. cannot be held responsible or liable for any content, text, pictures, or any other media found on this web site.
Management login
Powered by